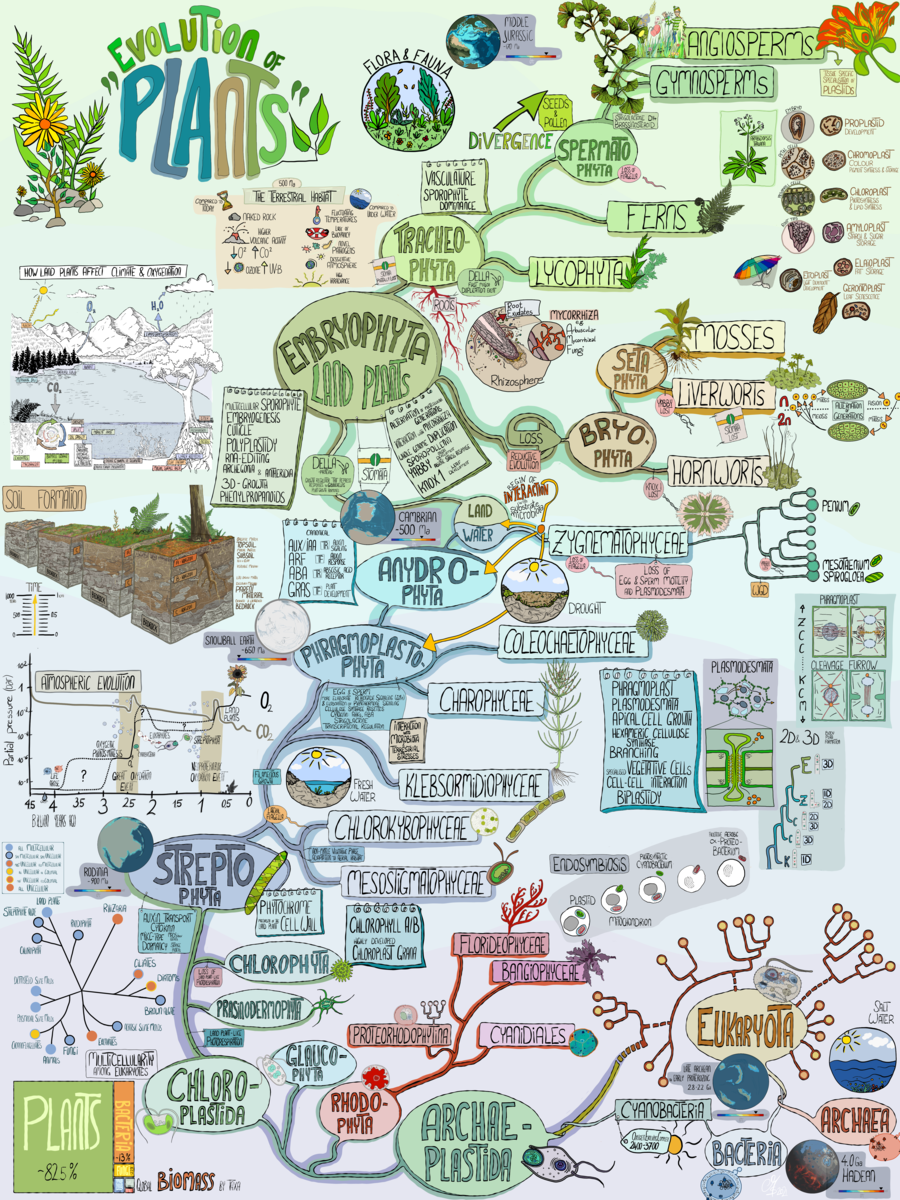 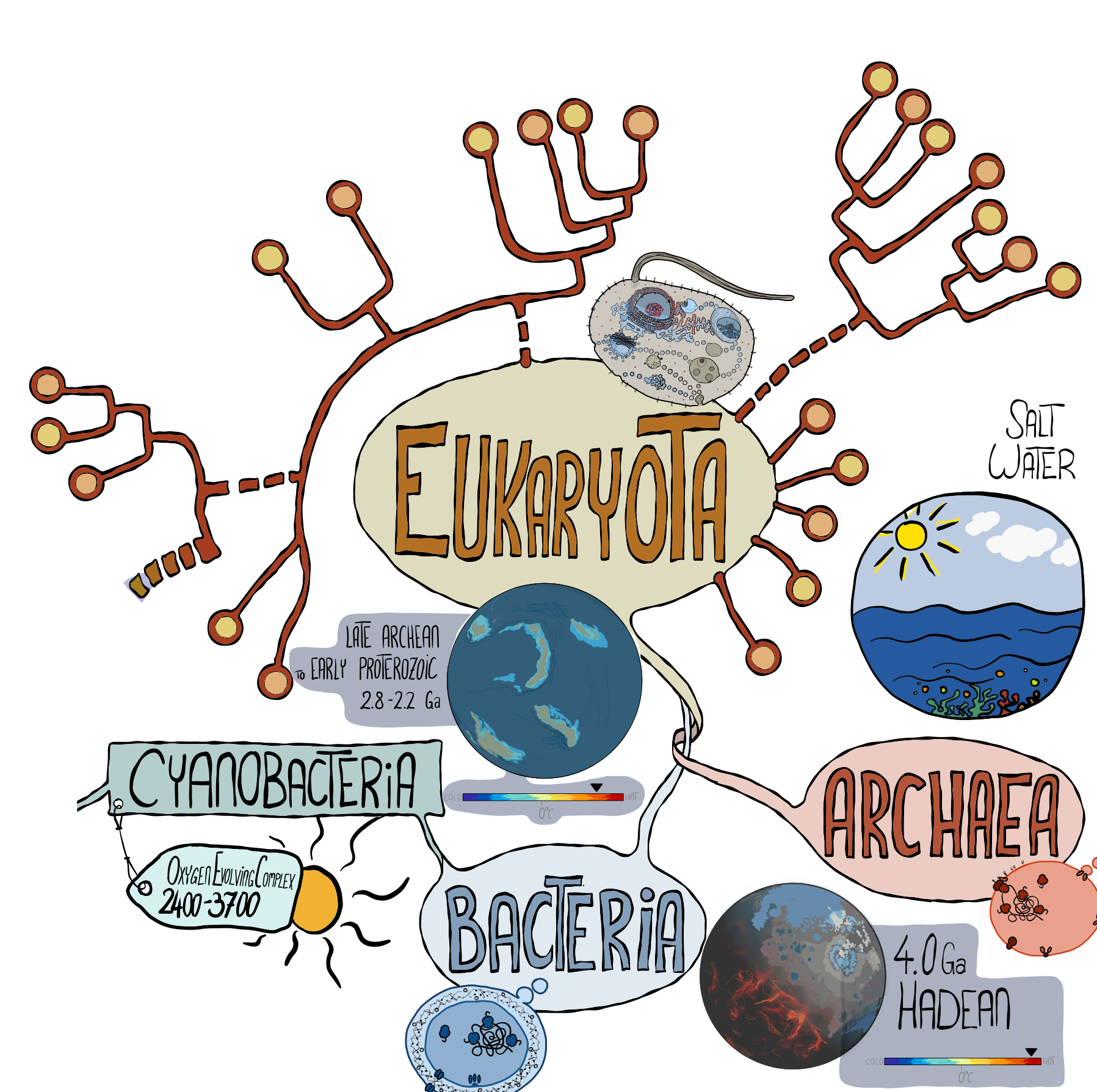 The three domains of life: Bacteria (blue), Archaea (red) and Eukaryotes (orange). The latter are defined by cellular compartments such as the mitochondrion or nucleus, meiosis and sex. The most recent phylogenomic grouping of the tree of eukaryotes according to [1] is schematically depicted. The lineage of the Archaeplastida leads to the main tree of the figure, with the plastid stemming from the endosymbiotic integration of a cyanobacterium. The cartoons attached to the three groups are redrawn based on [2]. 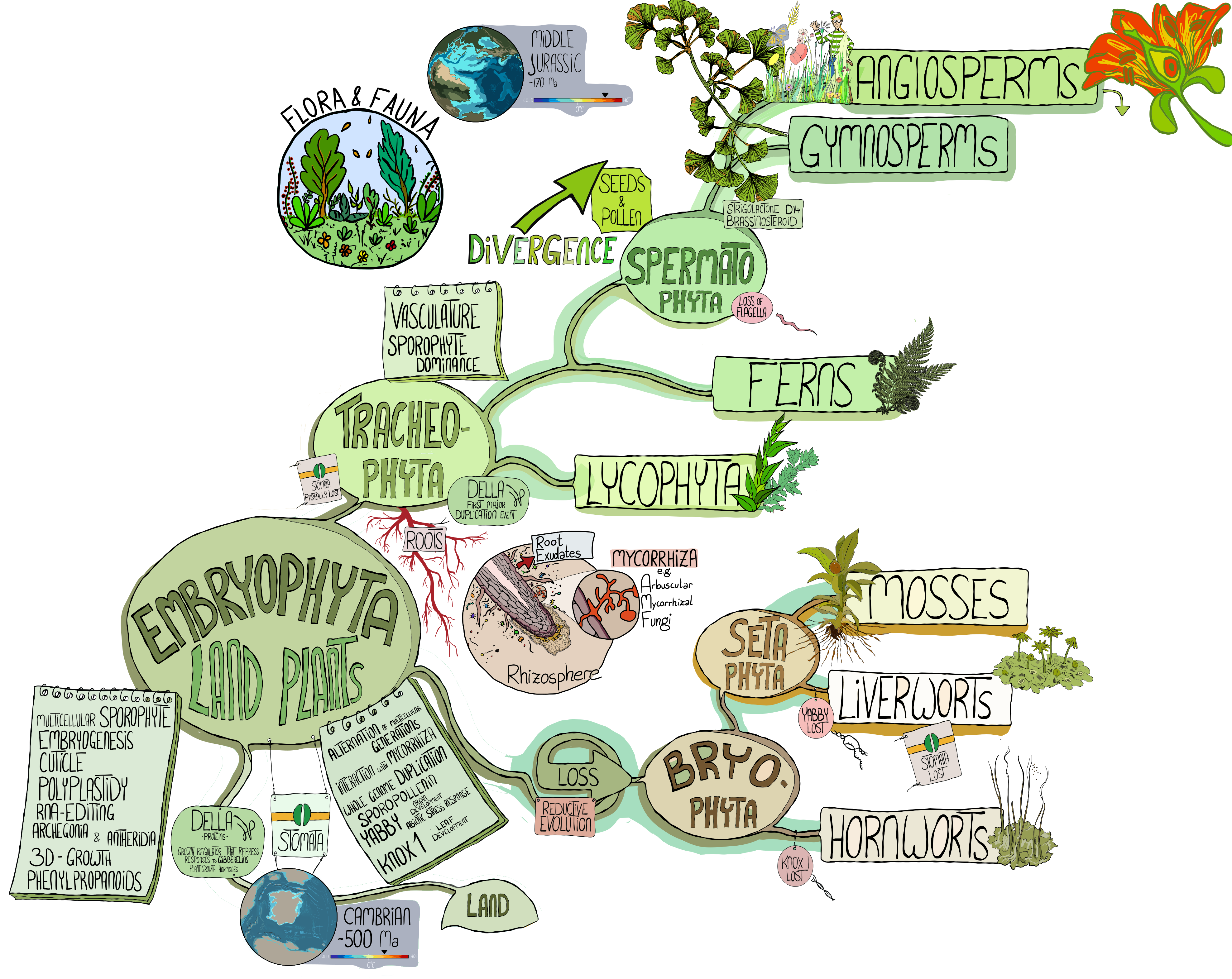 Land plant evolution is characterized by an early split into the non-vascular group of bryophytes and the vascular nonseed plants with lycophytes and ferns, and later seed plants (towards the very top right of the figure), which are divided into gymnosperms and angiosperms. Symbiotic relationships with soil-dwelling organisms, such as mycorrhizae, were critical for life on land to evolve, as the symbiotic relationship particularly enables better supply of nutrients. Current research points to an early origin of Stomata [18] and DELLA proteins [19] within the ancestor of all extant land plants. 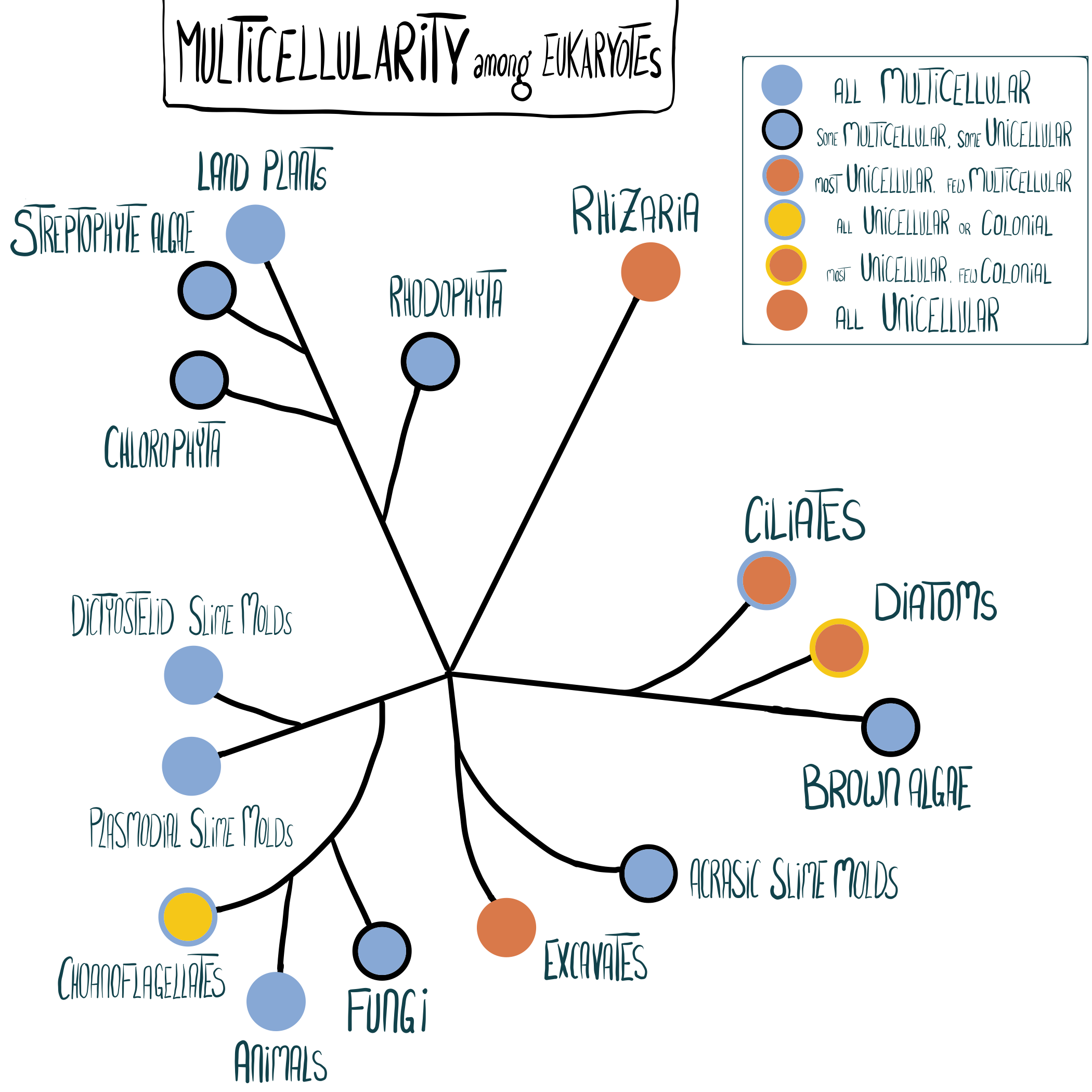 True multicellularity or a colonial lifestyle evolved multiple times independently across the different branches of eukaryotes. Figure redrawn from [4]. 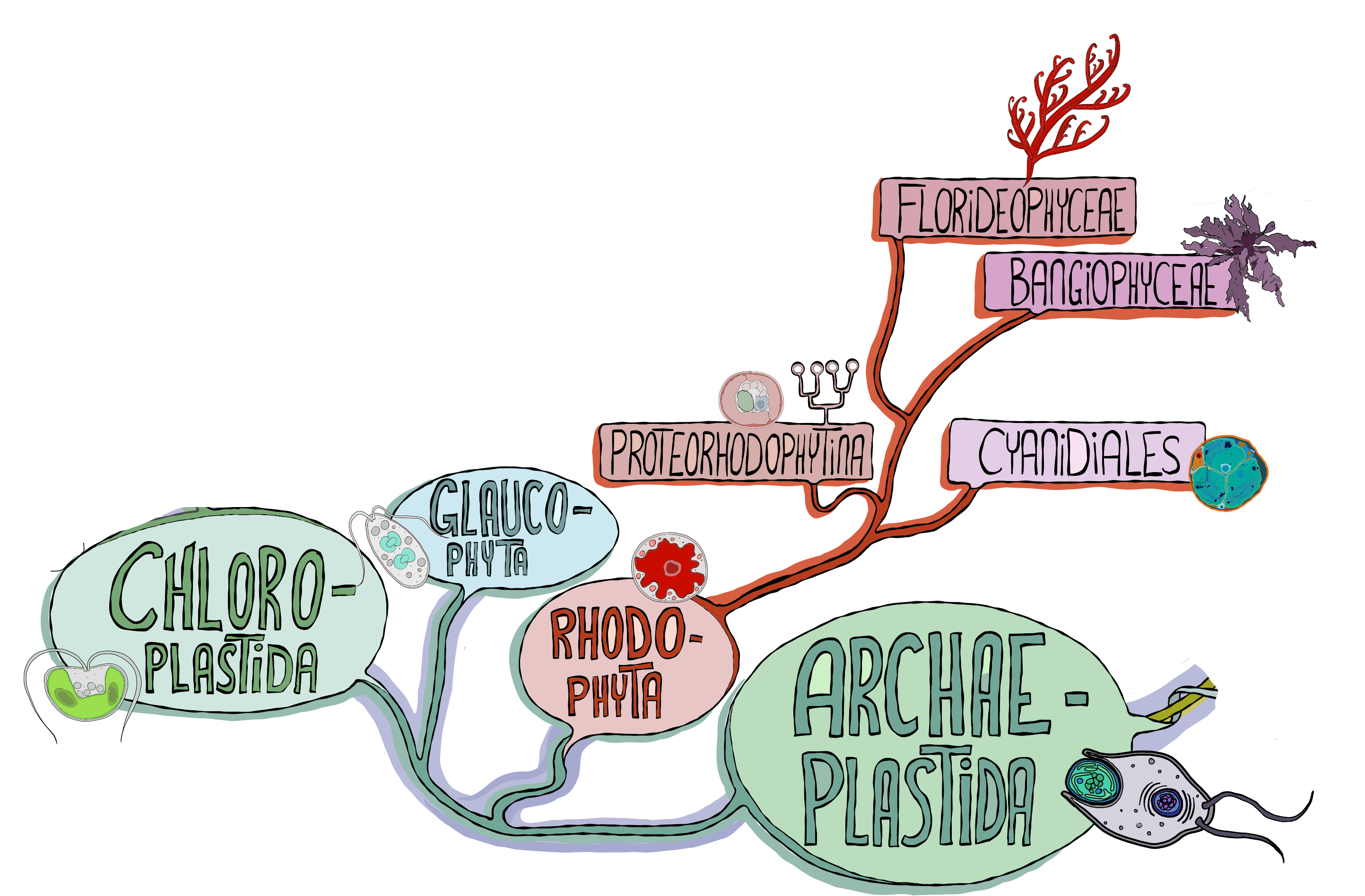 The name Plantae traces back to the first attempts that tried to pigeonhole the major groups of life [5]. The plastid-bearing lineage of eukaryotes shares a common ancestor (the host eukaryote that engulfed and transformed a cyanobacterium) and is today referred to the Archaeplastida. This group includes the red algae (Rhodophyta), the Glaucophyta (unicellular algae) and the Chloroplastida (also known as the Viridiplantae) - the green algae and plants. 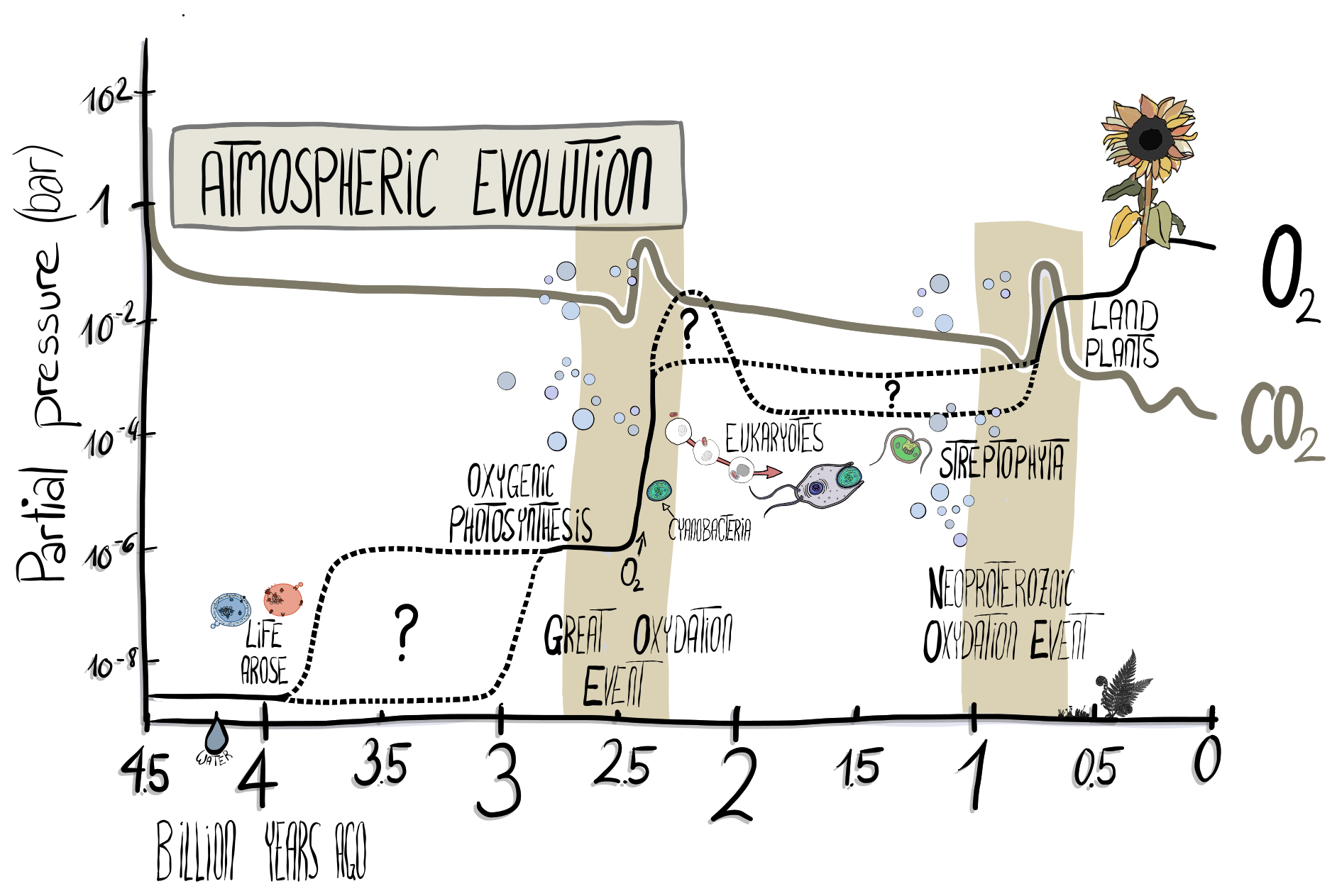 The evolution of oxidative photosynthesis, the emergence of the lineage Plantae, as well as the transition to land led to significant changes in the composition of the atmosphere, especially due to the massive increase in O2 and the fixation and burial of CO2. The figure shown is based on [6] and [12]. The main tree in the figure is based on the work of [8], showing features described in [9], [10] and updated according to [11], based on their molecular clock estimates. The Chloroplastida comprise the recently identified Prasinodermophyta [12] Chlorophyta (all algae) as well the Streptophyta (both algae and land plants). 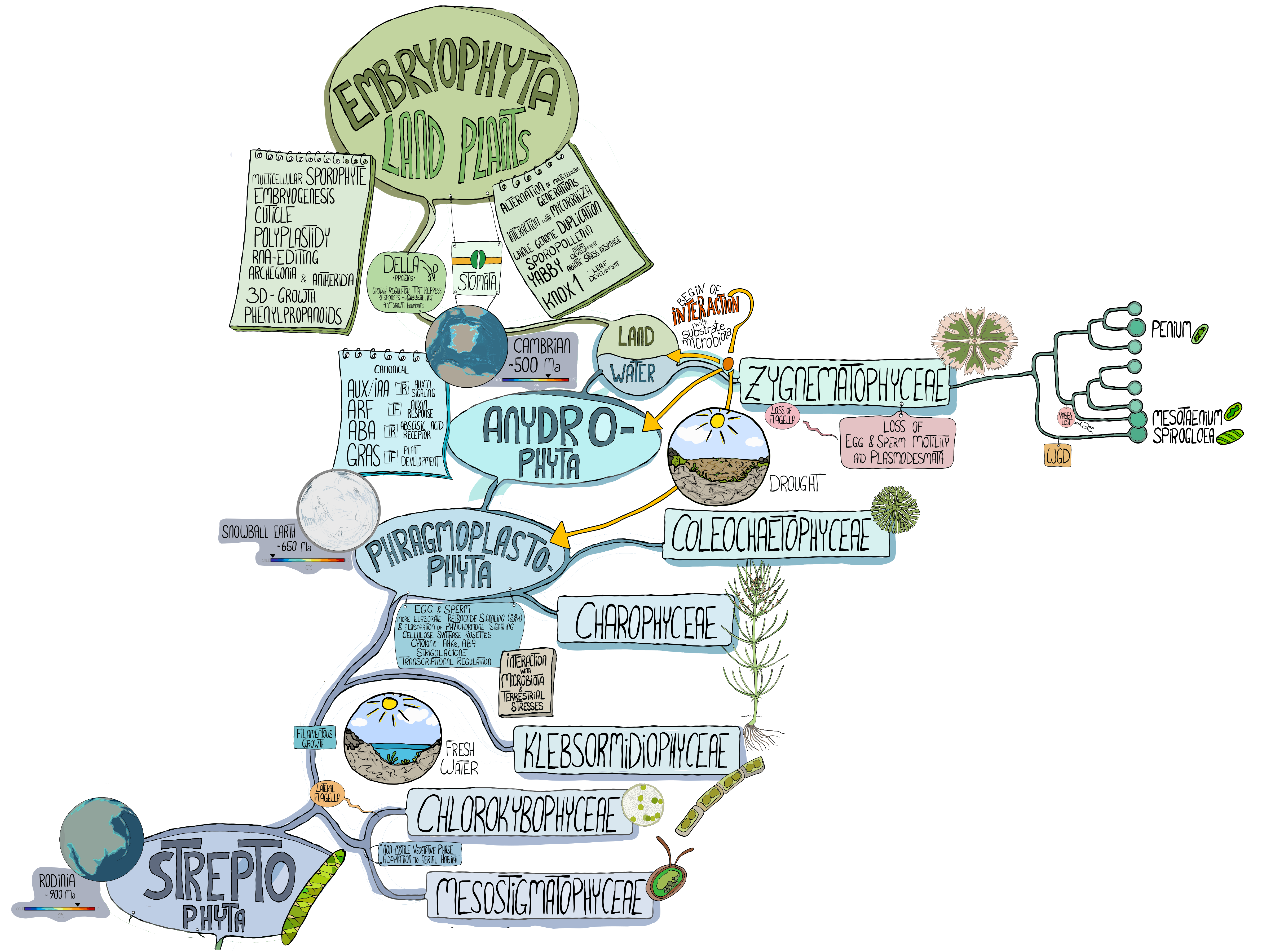 The Streptophytes comprise all land plants and the streptophyte algae from which land plants once evolved. They are characterized in some cases by adaptations from which the transition onto land profited. On the basis of some of their trades and their phylogenetic associations, they can be divided into two groups. The KCM grade comprises three lineages, which already show precursors of the of the cell wall typical of land plants, while the ZCC grade (also three lines) already display basics of three-dimensional growth and plasmodesmata for communication and exchange of substrate between cells. 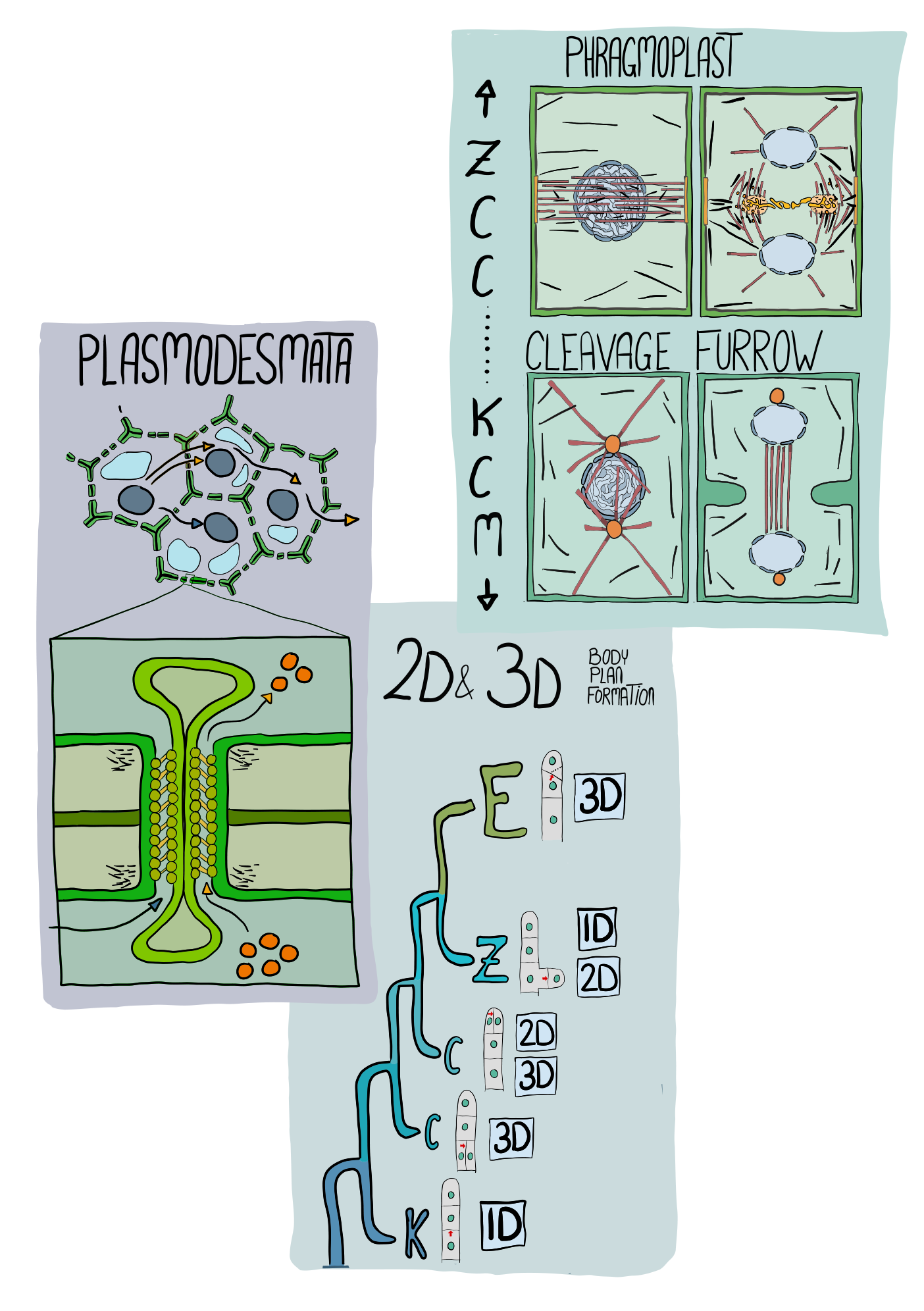 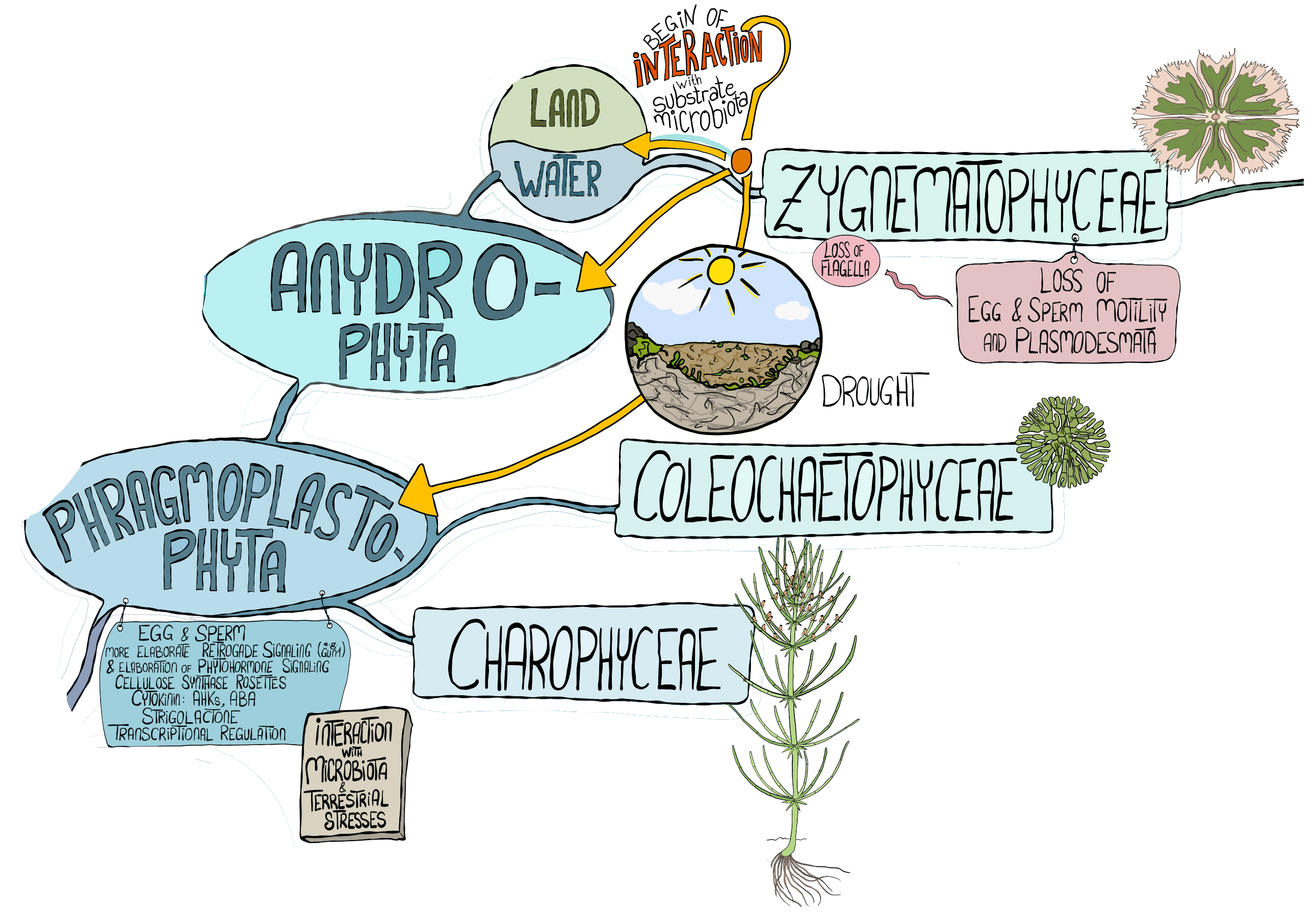 The Zygnematophyceae are the sister group to the Embryophyta and together they are referred to Anydrophyta “Plants that can cope with drought” according [10]. 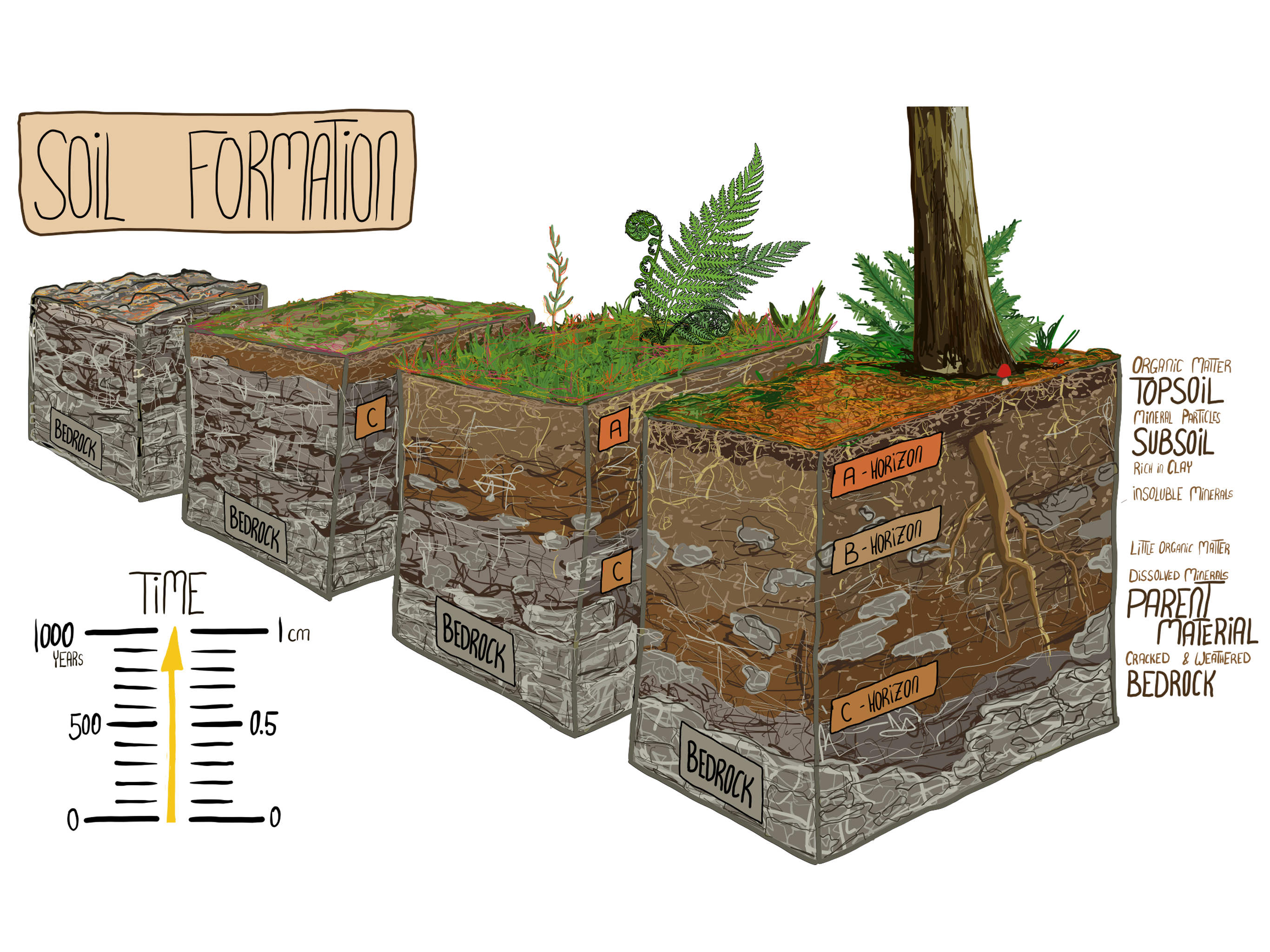 When the first purely terrestrial green plants colonized their new habitat, there was no soil. Bacteria and fungi had already colonized land, but only formed a thin substrate layer known as the proteosol or proto-soil. But only because of land plants, biomass accumulated and transformed into soil over millions of years [17]. 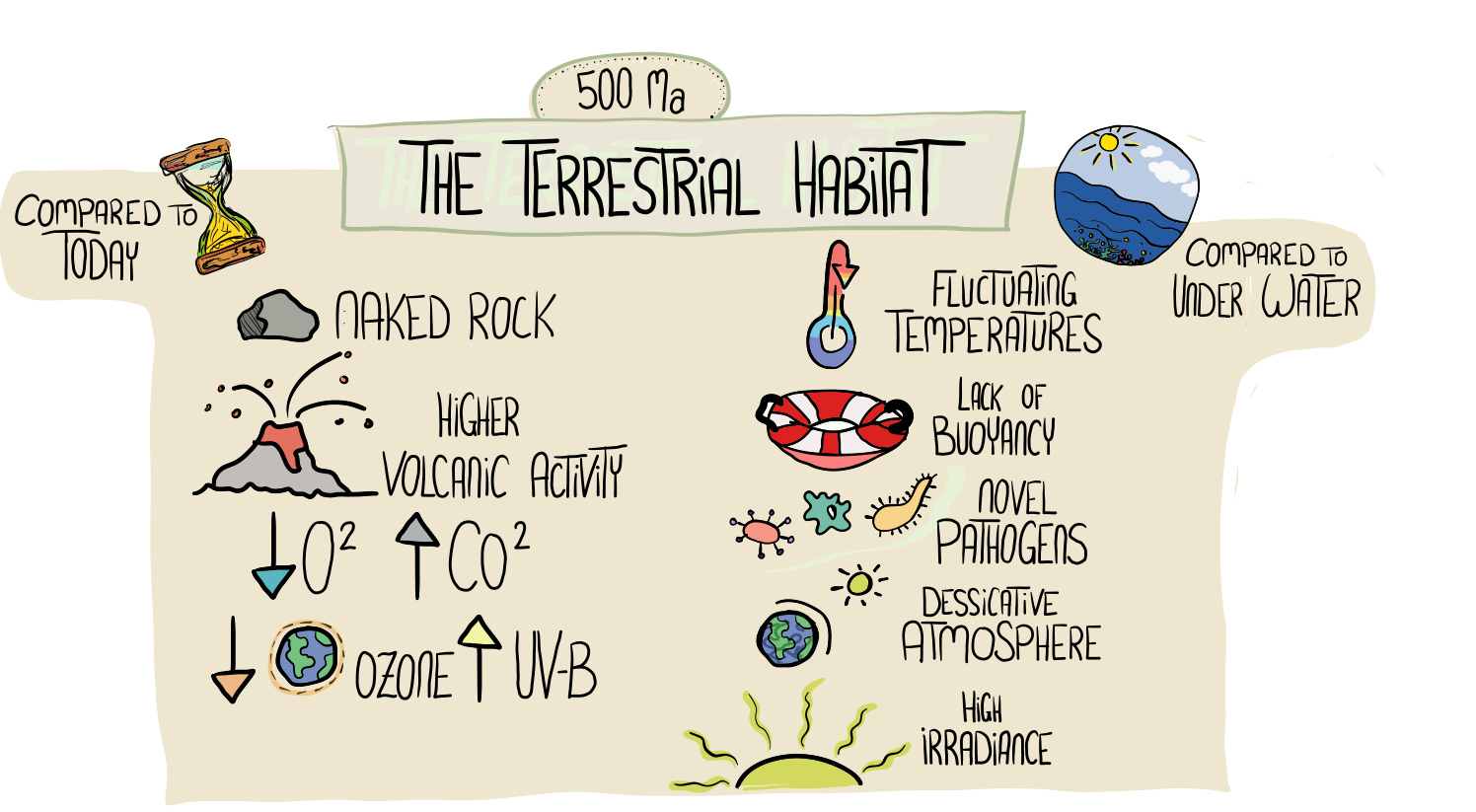 The terrestrial habitat 500 million years ago was fundamentally different from today. There was no soil yet, high volcanic activity shaped the landscape and climate. Atmospheric oxygen levels were significantly lower, while more carbon dioxide, a thinner ozone layer and higher UV-B radiation, made the transition to life on land challenging. Compared to life under water, numerous adaptations were necessary for the transition to land. For example, land plants have to cope with significantly greater temperature fluctuations, need to deal with gravitation in the absence of underwater buoyancy, they have to arm themselves against new pathogens, protect themselves from desiccation and at the same time continue to supply the organism with sufficient water and nutrients that are no longer constantly available from the surrounding water, and they have to protect themselves from the sun’s rays. The switch to a haplodiplontic lifestyle with alternating generations is one of the main adaptations in land plants [20–22]. Land plants significantly affect the Earth’s climate and oxygenation state in diverse ways. Through evapotranspiration, plants drive water cycles and induce rainfall, they ameliorate chemical weathering and enhance clay formation, serve as CO2 sinks which leads to cooling and they filter more short-wave radiation from the sun and reduce albedo. Plants, as an essential component of a complex soil community. Herby, they influence its functionality by chemical weathering through root exudates and various (especially nitrogenous) minerals, and its degree of humidity. Figure modified from [24]. Plants make up to 80% of the total biomass on Earth. Figure based on [25] with plant biomass defined according to [26]. Polyplastidy, housing multiple plastids per cell, evolved both in red and green lineage independently. It is associated with the emergence of complex and macroscopic body plans and allows a subsequent specification of plastids, so that different plastid types (chromoplast, amyloplast, elaioplast, etc.) can serve different tissue (leaf, root, petal, etc.) functions. This part of the figure is based on [23]. 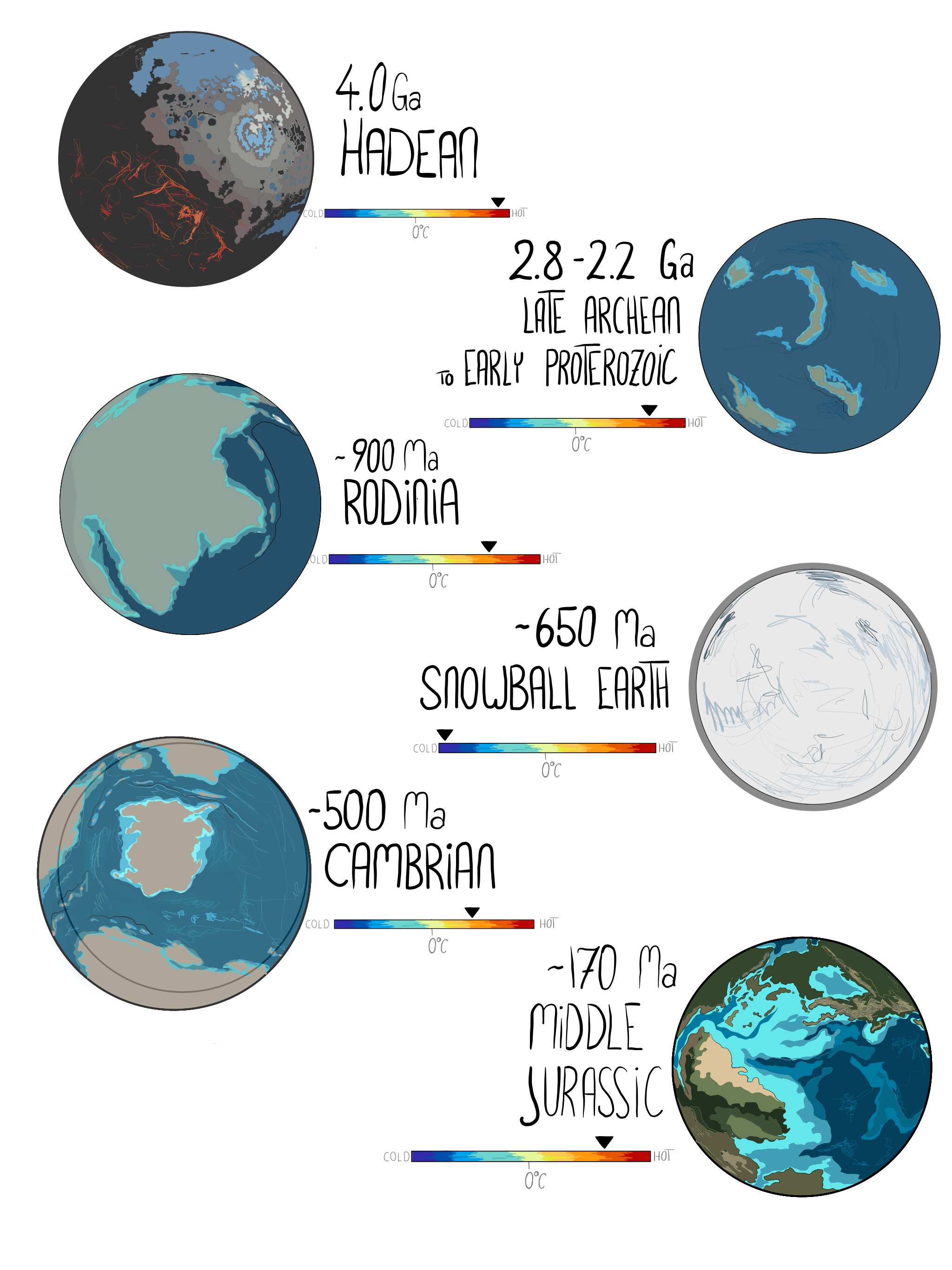 The face of the Earth as we know it today is only a snapshot in a billion-year history of transformation. The snapshot pictures were created based on [27]. When life began, the glowing magma ball had cooled just enough for liquid water to form the first primordial ocean. In the following millions of years, the existing land masses changed continuously, as did the prevailing temperatures. When streptophytic algae made it ashore more than 500 million years ago, the primeval continent of Pangea was the main land mass available. The changes in this landmass over the following millions of years also determined how land life evolved and continuously diverged.

Land plant evolution is characterized by an early split into the non-vascular group of bryophytes and the vascular nonseed plants with lycophytes and ferns, and later seed plants (towards the very top right of the figure), which are divided into gymnosperms and angiosperms. Symbiotic relationships with soil-dwelling organisms, such as mycorrhizae, were critical for life on land to evolve, as the symbiotic relationship particularly enables better supply of nutrients. Current research points to an early origin of Stomata [18] and DELLA proteins [19] within the ancestor of all extant land plants. Endosymbiosis describes the process in which one cell is engulfment by another and subsequently transformed into an organelle. Prominent examples include the origin of the mitochondrion (and hence eukaryotes) or later in evolution the origin of the plastid. Organellar genomes experience reduction and much of the genetic information is moved to the nucleus through endosymbiotic gene transfer. Figure modified from [3].

Impressum / Imprint • Datenschutzerklärung / Data policy
All data and services offered on this site are © copyrighted. Distribution via internet or other media is prohibited.